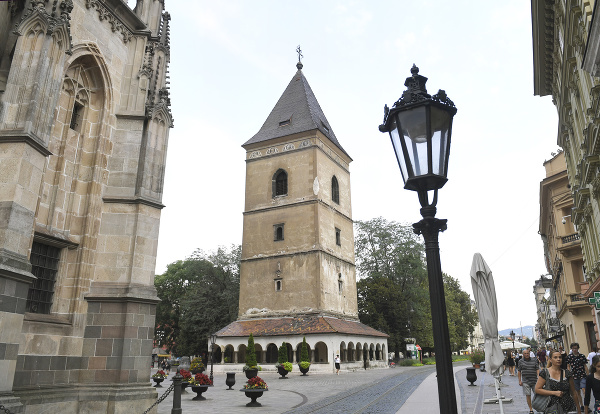 The original Gothic tower ("Red" tower) was built from the late 14th to the beginning of the 15th century as a bell tower of St. Elizabeth Cathedral. In 1628 the bell of St. Urban was placed. It was a crafter in 1557 by František Ihlenfeld, a bell ringer from Olomouc the. After the great fire in Košice, the so-called "Red" tower was also destroyed by fire, so the bell was temporarily stored at the town hall.

The bell tower was rebuilt only in 1628. This bell was a unique work of bell-making art due to its dimensions. The people of Košice consecrated the main bell of their town St. Urban respectively, as St. Urban was the patron saint of winegrowers because in previous centuries these people reached significant economic growth thanks to the wine trade.

In December 1966 the bell tower caught on fire. The fire broke out from the transformer station in the tower, the load-bearing beams burned down and the bell completely collapsed. The bell was torn by thermal stress during extinguishing. Burnt pieces of the bell are kept in the East Slovak Museum. The destroyed bell was reconstructed and erected in the area in front of the tower and the Dome of St. Elizabeth until 1989. It was restored by the family company of the Dytrichovci bell-bearers, Mr. Jiři Svoboda in particular. A functional copy of Urban's bell was sent as a gift by the city of Košice by the masters of Východoslovenské železiarní in 1996 when it was hung again in Urban's Tower.

An arcade corridor was built along the perimeter of the Urban Tower in 1911-1912, 1943-1944, and in 1947, and other tombstones from the medieval cemetery were placed outside of tower walls, which, according to medieval customs, spread around the parish church. Together with the Cathedral of St. Elizabeth and the Chapel of St. Michael, the City Tower was declared a national cultural monument in 1970. At present, the Košice self-governing region and the East Slovak Museum in Košice will maintain an exhibition of wax figures in the tower.